Robot Will Protect You 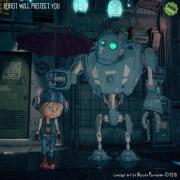 Synopsis:
2062: Cyberspace offers total emotional satisfaction online. To maintain the population, the government encourages people to procreate by offering the incentive of a free robot to help with the children. One rainy night nine-year old Tina and her guardian robot, SAM-53, set off on a quest that asks: if cyberspace has made romantic love obsolete, do we still need love in the real world?

The film continues Nicola’s interest to the retro-futuristic cyber universe (“Attack of the Cyber Octopuses”).

In masterly designed “ROBOT…” the world is still visually shocking noir, but the characters are full of warmth and the story is told with great empathy to them. It’s 2062. We follow small girl TINA and giant robot SAM-53 adventures in dystopic city, where the humans and robots share the space, lives and deep feelings.

The film is made using Kickstarter initiative, Cultural Endowment and producer’s own investments.